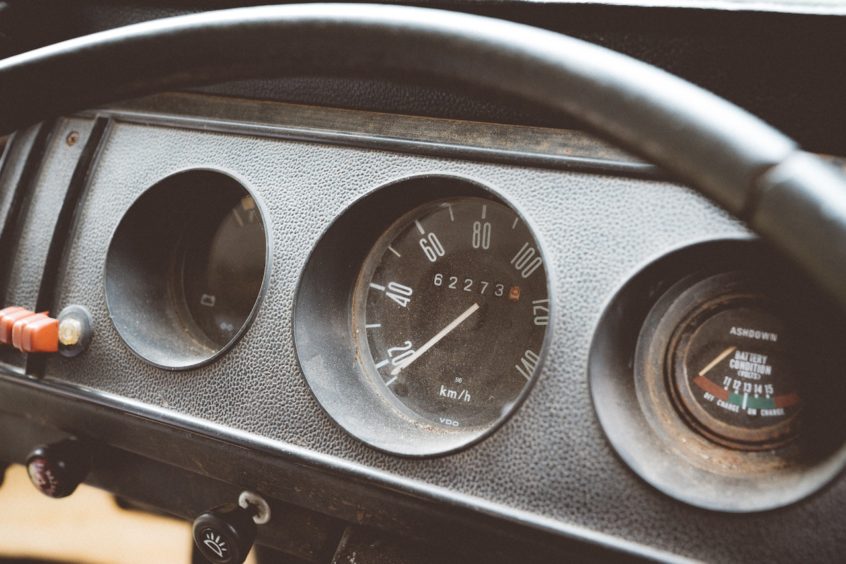 Odometer rollback is the most wide-spread fraud in used car sales. It is so popular because it increases the price of the vehicle substantially. And is quite easy to perform. Sadly, to detect if an odometer reading is changed is very hard. Even for professionals and tech-savvy.

Checking the full car history is the most reliable solution. You can do it by acquiring a car history report from a provider like CarVertical.

All you need is a VIN number. And you will get all the needed information: real mileage, traffic accidents, other damage, and the real number of owners. If such services are not available, you can check for certain signs or bring it to a trustworthy mechanic.

How to detect odometer rollback yourself

If the odometer is a mechanical one, look closely if numbers are aligned neatly and evenly. Sometimes fraudsters do it by hand and not very meticulously.

Look for scratches or other damage around the odometer area. It is a good hint that something was done. Talk to the seller and see their reaction.

Digital odometers are the bigger problem because rollback is done with a computer. So, there are no physical signs.

Look closely for deterioration of the car and compare it to similar cars that have similar odometer readings. Those parts should be checked:

The more owners the car had the bigger are chances that you’ll become a victim of odometer fraud. The problem is that even the current seller may be unaware of the clocking.

Odometer fraud in the US

Odometer fraud is a federal and state crime. A perpetrator can get some prison time or get fined. Not that many do. Not that many are caught and convicted.

When buying a second-hand vehicle, the customer must get a written disclosure of numbers on the odometer. But it doesn’t change anything if those numbers and microchip are tampered with. Also, if the car is ten years or older, the seller doesn’t have to provide any written documents.

Odometer rollback is an old and genuine problem. Every year half a million used cars are sold with tampered mileage. According to the National Highway Traffic and Safety Administration (NHSTA), estimated losses for consumers are 4-10 billion dollars annually. But those numbers are only approximate. And quite conservative.

Detecting odometer rollback is hard and real statistics are obscure. One thing is for sure, this is the most popular fraud when selling a second-hand car.

In Europe, odometer fraud is a huge problem, as cars very often change not only hands but also countries. According to European officials, around 50 percent of used cars traded in the EU have tampered odometers. If you look at post-soviet states those numbers creep up to 80 percent.

Odometer manipulation is prohibited in 25 of 27 EU countries. But sanctions vary. From felony charge and up to 2 years of jail in France to a friendly 266 euro fine in Slovakia.

There are few proposed solutions in the European Parliament that make sense. Like making technical inspections to include regular registration of odometer readings. Or creation and integration of national databases to exchange mileage readings across the continent. But discussions in the parliament go on for many years.

What is an Odometer Rollback?

In case you don’t know – odometer rollback is an illegal practice of changing odometer numbers to make it appear that a car has lower mileage than it does. Also, it is known as “busting miles” (US) or “clocking” (UK). It is the most common fraud in the second-hand car market in the US and Europe.

Very often a car looks good from outside. But inside is very different and even seasoned mechanics have a hard time determining the real status of the engine.

In many cases, scammers buy cars from businesses, make it good looking, and tamper with the odometer numbers. The buyer gets a very expensive worn-out vehicle.

Digital odometers are considered to be more secure than mechanical ones. But it’s more of a safety illusion than reality. Scammers use computers and easily change numbers on any odometer.

Pan-European survey ordered by the European Commission tells that consumers see the EU’s used car market as one of the least trustworthy of all sectors. Estimates are that with the help of clocking, prices of second-hand cars have increased 2000-5000 euros on average.

An educated guess is that all in all consumers and businesses lose around 5.6-9.6 billion euros a year. In the US losses are similar, only in dollars (4-10 billion dollars annually).

Planning to buy a used car? We recommend getting a detailed car history report from providers like CarVertical. For the time it’s the best and only reliable solution.